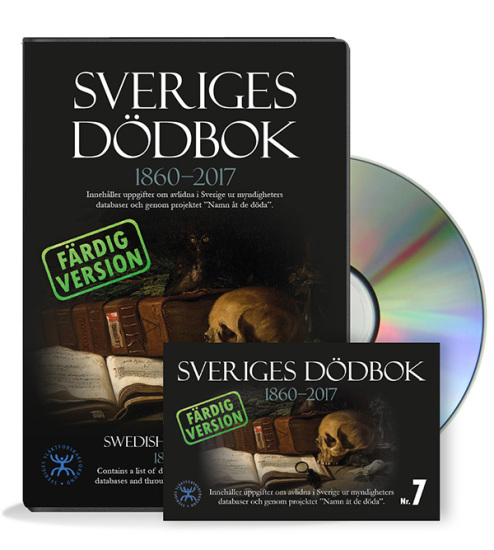 Swedish Death Index is one of our most popular databases, both for the novice and the experienced genealogist. The database contains information about population records that have died in Sweden.

Swedish Death Index 7 is the most recent version that covers the years 1860-2017. It contains approximately 13 million entries and is almost 100% complete with regard to name, date of birth and death, marital status, convocation and address. Birth congregation occurs for 98.5% of all dead after 1900 and to 92% for the period 1860-1900.

This has been added since Swedish Death Index 6

Over 3.6 million brand new items, of which volunteers in the "Name for the Dead" project have recorded nearly 3.3 million records from the years 1860-1900. In addition, the database has been supplemented with approximately 1.5 million entries from the years 1901-1970. 285 000 entries for the years 2014-2017 have been retrieved from the government register. Corrections of almost 100,000 entries have been reviewed and the results have been worked in, and to a large extent replaced previous data. About 25,000 duplicates have been identified and removed.

Several improvements have been introduced regarding presentation and search opportunities, for example, one can now search for occupation and comments and the address increase has been greatly improved. Free search means that all unconditional data can be captured, not just in the comments. Additionally, in this version, you can sort the hit list by name or date of birth. Quick search in the hit list can be done by entering the first characters. Correction feature is updated and bugs have been fixed.